Reading is our favorite way to spend beautiful spring afternoons! There are so many captivating young adult fantasy novels we are looking forward to reading before summer hits. We’ve included some of our top picks here, including Fable by Adrienne Young and Legendborn by Tracy Deonn! Check out our list to find your next exciting read!

Seventeen-year-old Fable is the daughter of the most influential trader in the Narrows. Four years ago she watched her mother drown in a storm, only to wake up the next day and find her father abandoning her on an island with little food. Surviving is difficult, and Fable relies often on the skills her mother taught her. The only thing that keeps her going is her determination to get off of the island and find her father so she can demand her rightful place beside him. In order to do so, Fable recruits a young trader named West to help her escape and cross the Narrows.

Unfortunately, the dangers of her father’s rivalries and trading enterprise have only intensified since she last saw him. West also isn’t who he seems to be. Fable will have to survive more than treacherous storms in the Narrows if they are going to live long enough to find her father.

Eager to win a chance to become the High King, the fae prince Brannick tricks Elora into teaching him her sword skills. Elora is forced to enter the realm of Faerie and will not be allowed home until the prince succeeds at becoming the High King or is taken out of the running.

Desperate to return to her starving young sisters, Elora decides to sabotage Brannick’s chance for the crown so that she can return home quickly. During the day, she helps train the prince and tries to ignore her growing attraction to him. At night, she works with a nearby king who plans to destroy as much of Faerie as he possibly can.

Can Elora reach her goal and stay alive?

Continuing our list of Young Adult Fantasy Novels, we have Legendborn by Tracy Deonn!

Bree Matthews wants nothing to do with her childhood home or memories after her mother dies in an accident. She finds the perfect escape – a residential program for promising high schoolers at UNC-Chapel Hill. Things are going perfect, until she is witness to a magical attack on her first night at the program.

Much to her disbelief, there is a flying demon feeding on human energies. A group of secret “Legendborn” students hunt the creature down. When one of them tries and fails to wipe Bree’s memory of what she saw, her own unique magic is unlocked.

What she doesn’t know yet is that the Legendborn are the descendants of King Arthur’s knights. A magical war is coming. Bree will have to decide what she is willing to give for the truth, and if she will use her magic to take the society down or join the fight alongside them.

4. We Hunt The Flame – Hafsah Faizal

In the kingdom of Arawiya, Zafira and Nasir are legends. Zafira is the Hunter. Nasir is the Prince of Death. While Zafira embarks on a quest to retrieve a lost artifact that would bring magic and healing to her world, Nasir is sent to kill her and find the same artifact. What both of them do not know is that the prize they so desperately seek could bring a threat more serious than either of them can imagine.

Buy We Hunt The Flame here

5. A Trial of Sorcerers – Elise Kova

As the most unwanted apprentice in the Tower of Sorcerers, Eira Landan lives her life in the shadows. The shadow of her magic’s whispers, the shadow of her older brother, and the shadow of the person she accidentally killed constantly loom over her. In an effort to step out of those shadows, Eira decides to compete for a place in the Tournament of Five Kingdoms.

Set against the best sorcerers the Empire has to offer, Eira fights hard to be chosen as one of the four champions. She is rewarded with discovering her rare talent for forbidden magic, and secretly meets a handsome ambassador.

Eira is prepared for a fight. Prepared to win. What she doesn’t know is what it will cost her, and that one of the candidates might not make it out alive.

Buy A Trial of Sorcerers here

6. The Princess Will Save You – Sarah Henning

One of our favorite young adult fantasy novels is The Princess Will Save You by Sarah Henning!

Princess Amarande is given an ultimatum when her father dies. She is to marry the leader of a nearby kingdom or she will lose her life and her crown. In order to force her hand, her beloved stableboy Luca is kidnapped. Fortunately, Amarande was raised to be a warrior, and nothing will stop her from saving the one she truly loves.

Buy The Princess Will Save You here

A girl who can speak to gods, a prince in danger, and a boy with a monstrous secret must assassinate the king and stop a centuries-long war. Their three paths intertwine in a world of blood, saints, and a forbidden love that threatens to tip the scales between light and dark.

This gothic fantasy is a must read!

As heir to both her family lines of powerful witchdoctors, Arrah yearns for magical powers of her own. Unfortunately she fails at bone magic, calling upon her ancestors, and living up to her family’s legacy. With her mother as the most powerful priestess and seer in the Kingdom, Arrah fears she will never be good enough.

When the children in the Kingdom begin disappearing, Arrah becomes desperate and turns to a dangerous, forbidden ritual. Since she has no magic of her own, she will have to buy it by trading years of her life away. Her borrowed power reveals a nightmare betrayal and a rising tide of darkness that will soon consumer her and everyone she loves. Arrah must race to unravel a deadly scheme before her fight will cost more than she can afford to give.

Veronyka is an orphan who wants to become a Phoenix Rider from the stories of old. After her sister betrays her, Veronyka sets out to find the Riders – and disguises herself as a boy in order to join them. In the meantime, the empire has discovered the Riders’ return and intends to destroy them completely.

Crown of Feathers is one of our favorite additions to our list of young adult fantasy novels! Creative, engaging, and beautifully written, we know it is one that you will enjoy!

When Amaya makes the rash decision to rescue a mysterious stranger from drowning, she fears that her actions will end up earning her a longer sentence on the debtor ship where she is held captive. Instead, she is offered unimaginable riches and a new identity by the man she saved. Amaya ends up on a dangerous course through the city-state of Moray, known for its desperate gamblers and old-world opulence. She wants one thing: revenge on the man who ruined her family and her earlier life. But the more tangled she becomes in the games of deception, the more she uncovers uncomfortable truths about her past. There is no one she can trust.

This gender swapped retelling of the Count of Monte Cristo is one we know you won’t be able to put down!

Born in America and moved to Nigeria, twelve-year-old Sunny has African features, but she is albino. A terrific athlete, Sunny can’t go out into the sun to play her sport, soccer. She doesn’t fit in anywhere. Then she learns an amazing fact about herself – she is a “free agent” with magical power. Soon, Sunny joins a quartet of magic students who study both the visible and invisible and learn to change reality. But will their training be enough to help them catch a dangerous criminal who also knows magic?

Akata Witch explores a whole new dimension of fantasy and folklore that will capture your imagination and keep you reading late into the night! Don’t miss this unique and special addition to the YA fantasy genre!

Finishing up our list of Young Ault Fantasy Novels we have Forest of Souls by Lori M. Lee!

Sirscha Ashwyn’s plans to become a royal spy are derailed when shamans kill her best friend Saengo. Somehow, Sirscha is able to restore Saengo to life. Sirscha is the first soulguide in living memory, and she is immediately summoned to the domain of the Spider King. Only a soulguide can help restore the peace that the Spider King is fighting for in the Dead Wood. As war looms on the horizon, Sirscha has to master her new abilities before peace is shattered, or worse, her friend Saengo is taken by the enemy.

That wraps up our list! Let us know what you’ll be reading in the comments below!

END_OF_DOCUMENT_TOKEN_TO_BE_REPLACED 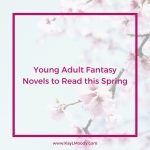 Reading is our favorite way to spend beautiful spring afternoons! There are so many captivating young adult fantasy novels we are looking forward to reading before summer hits. We’ve included some of our top picks here, including Fable by Adrienne Young and Legendborn by Tracy Deonn! Check out our list to find your next exciting […]